How To Referee Basketball: Guide to Being a Good Officiating Ref Every Game 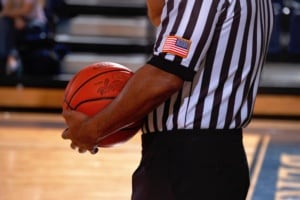 A great way to earn some spare cash and stay involved with the game of basketball is to work as a referee. Even many parks and recreation leagues will pay their basketball referees, though it may only be the minimum wage.

For players, it’s a fun way to stay active in the community and get a feeling of the flow of rules enforcement. For coaches, it’s a way to see how the game looks from the other side of the whistle. And if you just love basketball, but don’t really want to play it or coach it, then being a referee can turn into a good-paying career if you stick with it.

My first introduction to being a basketball started with my local YMCA. I spent 3 years refereeing youth basketball games, often being nominated by my fellow referees to work the league championships. That experience took me into refereeing at the varsity level for local high schools in my state and collegiate refereeing for two seasons.

I continue to referee from time to time, but my current focus is to be a coach for the youth basketball teams that my kids are on. Here is the advice that I wish I had been given so long ago when I first put on the stripes for my local YMCA.

#1. Join the NASO even if you just plan to referee youth games.


Some people love being an official for basketball games. Others hate it, but the process grows on them over time. You never really know how much you’ll love wearing the stripes until you put them on. For that reason, I highly recommend joining the National Association of Sports Officials right away.

There are local referee associations that you’ll want to join as well. This information can be found online, but you’ll get a better response by attending a local varsity-level game and asking one of the officials how to join up.

#2. Get to know all of the rules for the game according to your league.


At my local YMCA, our youth basketball league had additional rules to the standard basketball rules. Defensive players were not allowed to double-team an offensive player. No backcourt pressure was allowed. Certain procedural rules were also suspended, like the 5-second inbounding rule. Make sure that you know all of the local rules and then practice calling them before you get stuck into a game decision that you don’t really like.

#3. Be prepared for irate coaches.


The score was 20-19 and there were six seconds left to play. I had a coach screaming at me because his team was about to lose the game. I blew my whistle, stopped the game, and issued a bench warning for unsportsmanlike conduct. This made the coach turn tomato-red in the face, throw his clipboard at me, and begin using language that should never be uttered in youth basketball. That earned him a technical foul and two shots for the other team.

Final score: 22-19. To this day, the coach still blames me for that loss. You’ve got to be prepared for circumstances like this as a referee from a mental standpoint.

#4. Be prepared for irate parents.


In a close high school championship game, one guy on offensive went up for a shot – at least the motion of the shot. Four defensive players hacked this kid’s arms so that the ball went backwards and toward the floor instead. I was right there, making the call for free throws. One of the parents of the defensive player I called the foul on marched out of the bleachers and tried to punch me.

We always had a police presence at our games on some level, so I stopped the game and had the parent escorted from the school. You’re right next to the parents sometimes as a basketball referee, so keep an eye out for someone irate during and after a game if you need to make a tough call.

#5. You’re going to get some calls wrong.


I misread a play and thought that a girl had slapped the arm of the player instead of the ball. To this day, the sound of the slap was skin-on-skin to me, but the video replay clearly showed the girl got all ball. The girl made her one-and-one free throw opportunity and her team won by a single point. I got that call wrong. I got a few others wrong as well.

When you know for certain you got something wrong, admit it. You can’t change the result of the game, but you’ll get more respect from players, coaches, and parents.

#6. Your pay as a referee goes up as the level of play goes up.


When I first started as a basketball referee at the YMCA, I was making about $10 per game. I’d referee an average of 4 games each weekend day, which let me earn an extra $80 each weekend during the season. As a high school referee, I could make about $100 a night, assuming that I worked the junior varsity game before the varsity game. Sometimes those assignments would get split up.

I was also compensated for travel expenses for high school games outside of my region and all college games.

#7. You’ll need to take officiating tests at almost every level of basketball.


Before you can begin working as an official, almost every league will require you to take an officiating test. This is just a formal way for them to know that you know the rules of basketball. You’ll be asked some of the basics, like what an offensive 3-second violation happens to be. League-specific rules may or may not be included on this officiating test.

The only league that didn’t test my knowledge of basketball was the YMCA program. They let me officiate a few K-2 basketball games to see how well I would do before allowing me to work games where tougher calls would need to be made.

For my high school games, I had to take the test that was offered by my local referee association. This gave me the accreditation needed to work the games.

In college, I had to receive independent certification. This included proving that I had taken ongoing educational classes regarding basketball rules, referee conduct, and other points of emphasis.


I can remember my first foul call very vividly as a basketball referee. My arm shot up, but I didn’t know what to do with it. I sort-of pointed at the player who had committed the foul, sort-of turned my hand into a fist, and my other arm kind of did this wax-on, wax-off movement while I fumbled for the whistle.

In my 20 years of being an official, I can honestly say that I was always at my best when I was working games consistently. Any time off, even if it’s just between seasons, puts some rust on the referee mechanism.

I recently subbed in as an official as a last-second replacement for a local junior varsity game. It was my first game in nearly 2 years. Let’s just say it was a little uncomfortable for all of us.

If you want to make it to the top levels, you’ve got to stick with it. Referee recreational league games, even if you don’t get paid. Volunteer for charitable 3-on-3 tournaments. Take every game your association will give you, even if you need to take a vacation day from your regular job. It will pay off in the end. Good referees get noticed because they don’t interfere needlessly with the game and that’s what will advance you.

#9. Wear comfortable stripes and get the right equipment.


For a long time, all I wore was this generic referee shirt that I’d picked up at a local sporting goods store. It did the job well enough, but it was always super scratchy. When I’d sweat, I’d get puddles around my collar because it absorbed everything.

Cheap stripes are going to make you feel miserable. I really like this lightweight option, especially since I’m not a big fan of the common V-neck design: Click here to compare pricing on Amazon and get an awesome deal.

You’re also going to want a high quality basketball referee whistle. The best whistles will clip to your shirt instead of hang around your neck. They’ll also provide a loud, clear sound even if you can’t get much air into them. I really like this one: Click here to compare pricing on Amazon and get an awesome deal.

Bring at least two whistles with you to a game. You’re out of luck if you need to work and have no whistle.

Carry a notepad to keep at the scorer’s table as well. Don’t trust a hometown scorer to keep track of fouls accurately, especially in a big game.

I also like to bring along a pressure gauge to test the game basketballs. This way you can make sure the equipment being used meets your association’s specific standards. This one is the one I prefer: Click here to compare pricing on Amazon and get an awesome deal.

Being a basketball referee can be a lot of fun. It is also a lot of work. If you have a passion for the game, becoming an official can be one of the most rewarding experiences of your life – even if you have a parent try to break your nose from time to time.

Find out more about getting started with basketball here!